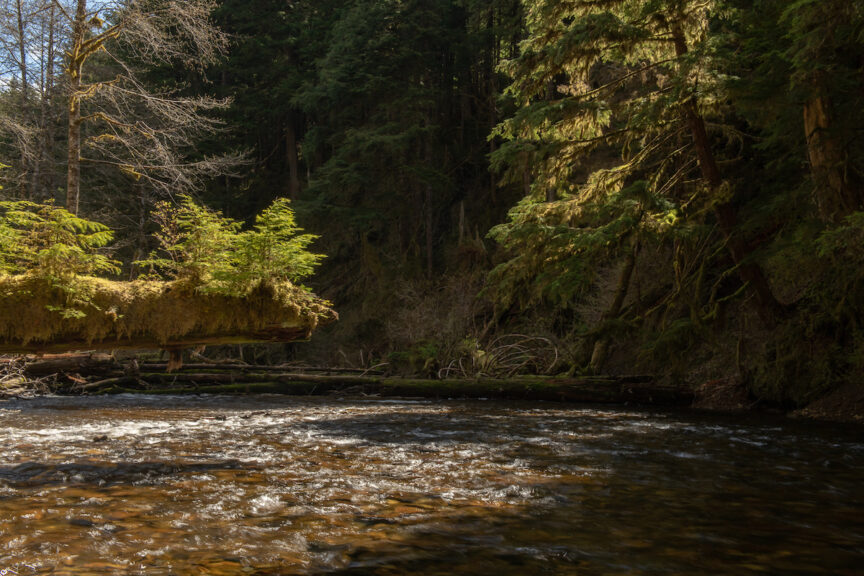 The next time I go steelheading, I’m going to the Tongass.

I’ve got the whole itinerary planned out – the flight, the ferry, the public-use cabin, the shuttle to the river. And, a mental packing list: ample bags of rain gear, lots of gloves, wool socks, snacks.

In my head, the trip’ll be cold – maybe feeling pretty “type 2 fun” at times – but it also feels stubbornly optimistic. I picture it being refreshingly quiet and pretty soggy. In my mind’s eye, it’s dense forest – evergreens with alders coming awake after winter.

My friends’ photos confirm these pictures in my head, and they re-ignite my desire to go. Photos of colorful, beefy and hard-won steelhead adorn my feeds. They’re held tenderly by an angler whose face is a little ragged from days getting rained on while standing in the water casting. You know, steelheading. They’re kneeling on a small stream. There’s no human development or the need to share water anywhere in the trip photos. It sounds nice.

While I wait to pull the trigger on booking the travel, I keep tabs on the Tongass.

Late last month, I saw the United States Department of Agriculture (USDA) get one step closer to repealing the Roadless Rule on the Tongass (check out this short video for a primer on the Roadless Rule). You may as well read that as: last month the USDA got one step closer to opening up some of the wildest, greenest areas on the Tongass – the best areas in the forest for fish and wildlife – to industrial, clear-cut logging of ancient, majestic old growth trees.

The move is a smack in the face to the 96% of commenters who asked them to keep the rule. It’s a worry to the more-than a quarter of residents of Southeast Alaska whose jobs are based on fisheries or tourism. It’s a threat to warding off global climate change – those trees store a heck of a lot of carbon. And, as an angler, it made me feel like we’re chipping away at the few places we can go chase these creatures, to feel ‘out there’ and be someplace wild.

People don’t visit Southeast Alaska to see massive swaths of clear-cut stumps. The logging industry of the region has been steadily replaced by more sustainable uses of the Forest, and the Roadless Rule has been carefully applied in the region so it works for its communities. In fact, every single time a community requested an exemption to the rule so they could do an infrastructure project, road upgrade, or even mining exploration, the Forest Service granted the request within a matter of weeks.

The only reason to undo the Roadless Rule in the Tongass is to give preference to the timber industry over the people who actually live there who rely on the intact forest for their jobs and culture, and for the food that goes on their tables.

I want to catch a Tongass steelhead on a small stream with only my travel-companion there to back me up and say it happened. I want to release it back in the water and watch it swim away into a tunnel of trees.

But more than that, I want the option of being able to catch a steelhead on the Tongass – and that’ll never happen if we allow its most productive pieces to be cut up and shipped away.

I’ll be keeping tabs on the Tongass. I’ll keep speaking up. One day I’ll get there.

To send a letter to the USDA and decision makers in D.C. about keeping the national Roadless Rule on the Tongass, click here. To learn more about the Roadless Rule in Alaska, watch the short video on this page.