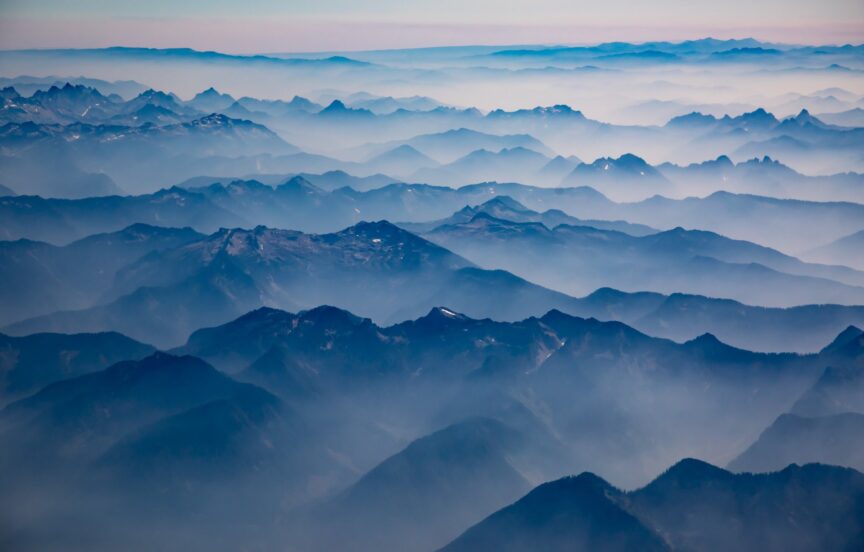 This is a guest post from AMANDA MONTHEI, who is a freelance writer, former wildland firefighter, avid steelheader, and host of the podcast Living With Fire, in which she explores the critical role fire plays in American landscapes. She lives in Bellingham, WA.

It’s understandable that after a fire season like the one we just had—by many accounts, one of the worst fire seasons in recorded history in the US—many anglers want to know: how do the fires that we see all over the news affect the steelhead and rivers we love?

That question was once pretty easily answered: fish evolved alongside fire, and thus relied on fire to keep them hardy, reintroduce critical minerals to the soil and (therefore) rivers, and create habitat through trees burning and falling into river systems.

But things have grown slightly more complicated recently. Fires no longer burn like they did 100 years ago; naturally occurring fires burn in cycles, usually every 3-10 years, creating a mosaic of fire scars on the landscape. These fires occasionally burned at high severity—imagine a forest that has only the skeletons of trees standing—but more often than not they burned at a moderate intensity that cleared underbrush, encouraged growth of fire-adapted plant species and improved forest health.

Yet over the last 150 years or so, a cocktail of mismanagement, European colonization and fire suppression, climate change and more people building homes in fire-prone landscapes have all changed how fires burn. They’re no longer the regularly occurring, low- or moderate-intensity events they once were. Instead, we have fires in forests that haven’t burned for decades, resulting in massive conflagrations that end up on the news—fires that, as this fire season proved, wipe out communities with little warning, replace stands of forest and make everyone wonder how we can possibly prevent similar destruction in future fire seasons.

The good news is that a majority of wildfires are still burning at the historical norm in terms of intensity—with a few patches of skeletal forest left in their wake but with vastly more areas affected by fire of the moderate variety. These fires are critical for trout, steelhead, salmon and countless other fish species; the surge of nitrogen and other nutrients into the soil following a wildfire encourages insect and plant growth, while trees that burn and then fall provide critical habitat for salmon, steelhead and trout. Short term destruction in the form of rapid temperature increases (often a result of a loss of overstory following extreme wildfires), or erosion and sediment flows (which can choke fish and their eggs with toxic compounds and a lack of oxygen), do often result in long-term benefits for the affected watershed. Ecological “resets” like those that result from large wildfires are an essential ingredient for strong, well-adapted fish, despite population and habitat loss in the immediate aftermath of wildfires.

“You look at these fish and what we see is they’re highly adapted to a highly dynamic landscape,” said Gordie Reeves, a retired research fish ecologist at the Pacific Northwest Research Station in Corvallis. “So events like fires are nothing new to them—the challenge is that we’ve truncated that process [by creating] dams, culverts, and other things that impede them finding these new habitats.

“But we labor under the expectation that we should have strong populations everywhere and if a population declines somewhere, something is wrong. And maybe it really isn’t.”

The important thing to remember in the fire versus fish conversation is that it’s a complex relationship that has been made more complex with climate change and human activity and settlement, whether through dams, forest management, fire recovery efforts or building homes in wild spaces. One major paradox within this complexity is that massive destruction from wildfires this year may lead to stronger and healthier fish populations 10 years down the line; one needs only to look at the Yellowstone Fire in 1988 to see that large, record-breaking wildfires can eventually be quite beneficial for the rivers and fish that exist in these fire-adapted ecosystems.

“Everyone thought the Yellowstone fishery would go in the toilet after the [1988 Yellowstone Fire], but it boomed, and why? You had a different set of conditions, you had more primary productivity depending on the input of litter and whatnot, and the water temperatures didn’t warm as much as what people thought. Fish had these new opportunities and they knew how to adapt to them. The bugs also knew how to adapt to them and that translated to the fish,” said Reeves. “All of those types of things are happening as a consequence of fire but we just don’t appreciate them.”

Bringing it back to the coast, anadromous fish specifically require regular habitat disturbances to stay tough—if given an option, wild steelhead and salmon will choose complex habitats that challenge them over simple environments (think slow water, no regular habitat disturbances and not much in the way of debris). In human terms, maybe this could be analogized through homesteading versus living in a house in the suburbs—homesteading will present daily challenges that make thriving in that specific environment difficult, but those who handle these challenges will eventually foster a strong ability to survive in that environment over years and years of overcoming obstacles specific to that area. Maybe that analogy doesn’t quite work, as a house in the suburbs has its own challenges, but that’s neither here nor there. The point is: fish that evolve to survive in a specific environment—one that experiences regular disturbances from fires, landslides, floods and other occasionally disastrous natural events—will come out hardier and better adapted to the specific challenges present in those landscapes.

“We think of things always being stable and ideal, and we live in a world that is anything but,” Reeves said. “These fish have persisted in this world for a long time and they know how to adapt to it.”

The core idea here is that fish, particularly those that are native to fire-adapted landscapes and watersheds, will be fine. Fires like those we saw this summer are becoming more common, and that’s problematic for our communities and our livelihoods, but a growing amount of research indicates that fish are well-adapted to fires along the entire spectrum of severities. Low to moderate intensity fires are altogether necessary for healthy rivers and fish. Even high-severity fires have a place in the long-term viability of a river system and the fish that reside in it. This is one more reason why wild fish are so important to rivers in these landscapes, as they have the diversity to persist through these events.

This, of course, doesn’t mean we don’t have work to do. We—that is, anyone who lives in a fire-prone landscape in the West—must work to make sure these landscapes are as well-adapted as they can be to a future of coexisting with larger, higher severity wildfires. The answers to our wildfire problems are as complex as the problems themselves, but a good start is that we must use prescribed fire more widely to ensure that our communities, forests and watersheds are prepared for a future with fire. Creating these “buffers” through prescribed fire units is one critical ingredient in our fire resiliency, but educating ourselves about fire and the myriad of benefits it brings to our landscapes, forests and fish is equally important. And those benefits—despite the short-term destruction we may see in the aftermath of fires like the Archie Creek Fire on some of our favorite steelhead water—do extend to fish. We just have to allow fish to reap those benefits, which means allowing fire on the landscape, removing dams to allow more movement between systems and reminding ourselves that this is all natural and all part of the same life histories that have created healthy and hardy steelhead for millennia.

“There are all kinds of mechanisms you can think of that are built into these populations to allow them to persist, and I think the challenge for us is how do we allow those mechanisms to take place, how do we allow the expression of those life histories? How do we provide them the opportunities to move around the landscape and find new areas to colonize as [disturbances] happen?” Reeves said. “Rather than simply saying we have to protect this or protect everything, what we need to be protecting are these processes, not the places.”