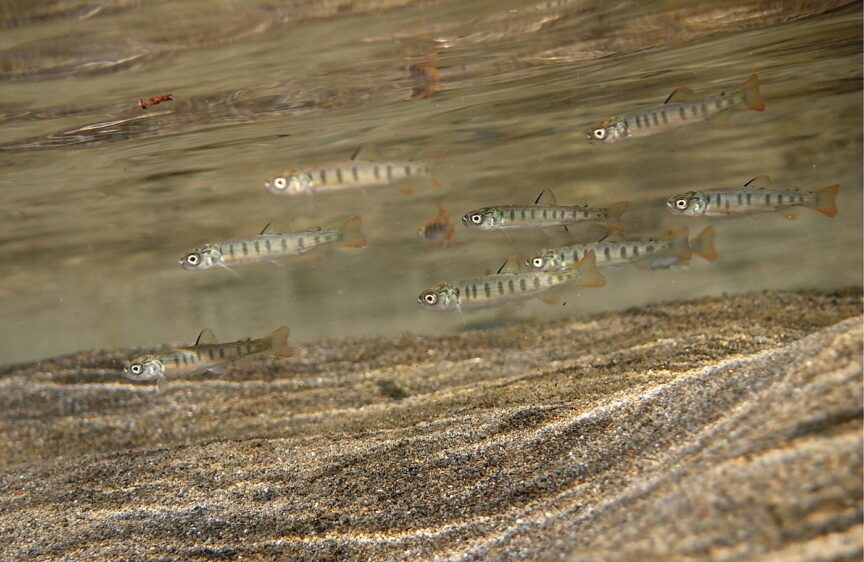 Some serious rainstorms on the West Coast recently signal that Fall is well underway and we are approaching winter steelhead season, which has all of us excited to get out on the water again.

Until then, we have another Science Friday to drop some knowledge on how steelhead fry survive in intermittent streams.

This week we review a Master’s Thesis from John David Faudskar, conducted when Faudskar was at Oregon State University in 1980. Yep, we are going way back in time here. This study examined how young steelhead behaved during their first summer of life in the Rogue River watershed in Oregon.

The Rogue River is a relatively large watershed that drains the Cascade Mountains and is one of the most renowned steelhead rivers on the West Coast. The Rogue is interesting — while it drains the coast, it is characterized by a fairly warm and dry climate, much like the interior Columbia and Snake Rivers. Consequently, many tributaries in the Rogue go intermittent during the summer, and this study helps us understand how fish deal with such situations.

The goal of the study was to describe the behavior of fry movement, how fry use their habitat, and the mechanisms that influence how and why fry move. As many of our followers know, the term fry refers to the life stage after a juvenile emerges from its egg and begins feeding. The fry life stage lasts only a couple of months, after which the fish become a parr. Parr are larger, but also defined by the formation of big oval marks along the side of the fish.

The study was conducted in three tributaries, in addition to an artificial stream in a laboratory, which allowed Faudskar to directly observe fry behavior during the evening, which would be much more difficult to do in nature.

Here is what they found.

First, fry began emerging from the gravel in April and stopped emerging in June. Emigration downstream began as early as April and continued through July and into August, when downstream movement was no longer possible because the stream reaches below began to go dry.

Second, the number of fry that moved downstream, which are referred to as emigrants, was highly variable between years and tributaries, but generally ranged from approximately 39,000 to 106,000 fry. That’s a lot of juvenile steelhead moving downstream to find a better place to hang out!

Third (as we at Wild Steelheaders United have observed several times on the Olympic Peninsula), the smallest fry were like little ninjas: they only moved downstream under the cover of darkness. During that time, they spent most of their time in the shallow channel margins at or near the surface, where they allowed the current to carry them downstream. This type of behavior has probably been selected for over generations. It’s clearly the safest way, and least costly means in terms of energy expenditure, of moving from one spot to another.

Fourth, in contrast to the smallest fry, larger fry actively swam downstream and while they too tended to move at night early in the season, later on they also moved downstream in daylight, often in schools.

However, even though the larger fry were better swimmers, they still displayed evasive behavior. For example, when moving downstream during the day they often remained near the stream bottom but shifted to the surface once it was dark. This probably reduces their chances of being preyed upon by birds such as kingfishers and blue herons.

Fifth, most fry moved as stream flows declined and water temperatures increased from early to late summer. Interestingly, the author also found that disturbances, such as rain hitting the surface of the river, were associated with downstream movement of fry.

The question is: Why do fry move?

As the author notes, it is likely that fry moved because of their requirements for food and space.  As fry size increases so do their territorial requirements, and if stream flows decrease so does habitat area. Fish must respond to such changes.

Experiments suggest larger fry usually outcompete smaller fry for food and space, so it’s likely that a proportion of the moving fry are simply making the best of a bad situation and trying to find a more profitable location for feeding and growing. It’s also likely that both large and small fry make wholesale movements in areas that go dry, because it doesn’t benefit a fish to “win” a territory if that territory will soon be dewatered.

We have seen similar movements by steelhead fry in Washington’s Elwha River system. And other studies have shown the same.

What this really highlights is how important intermittent streams are to steelhead and many other salmonids. During the wet portion of the year, the tributaries are used by spawning adults; spawning during this time allows fry to emerge from the gravel and to move downstream and seek out better habitats prior to the onset of flows dropping and the stream drying.

In fact, this type of strategy is very common in the drier and warmer parts of the steelhead’s native range (think central and southern California coastal watersheds). Interestingly, this behavior has also been observed in watersheds that receive large amounts of rain, such as tributaries draining the Hoh and Quillayute Rivers on the Olympic Peninsula.

The bottom line is, intermittent streams provide critical habitat for steelhead. As climate change  drives environmental conditions in the West warmer and drier, it’s likely that steelhead reliance on these types of streams will only increase.This is why Wild Steelheaders United and our conservation and agency partners continue to develop and implement innovative strategies to conserve these types of habitats. They are likely the future nurseries for many of our steelhead populations.