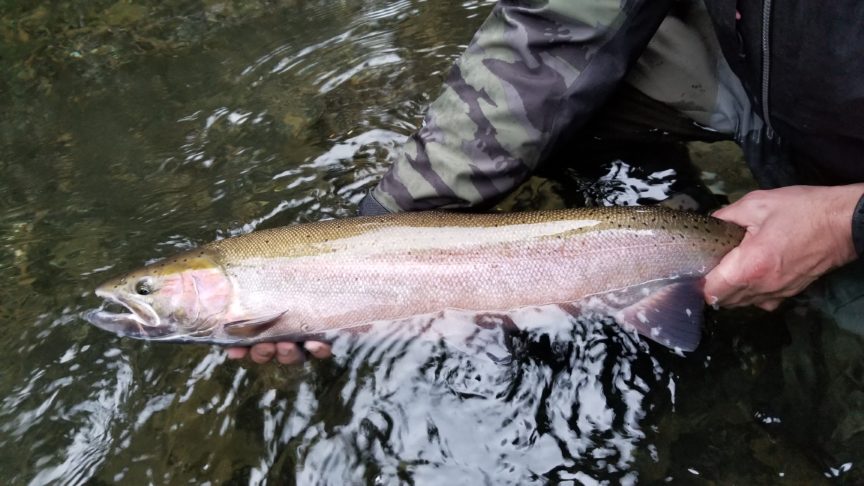 Last month, the 2021 Washington State legislative session wrapped up and aside from a particular veto by Governor Inslee last week, the overall session was productive for steelhead recovery and fisheries in the state, despite the extremely unusual circumstances with a mostly remote session due to the ongoing COVID-19 pandemic and the earlier concerns about decreased agency budgets statewide. We are mostly pleased with the outcome, from both a policy perspective and with the final operating budget.

This was one of our strongest areas of success this session, especially for Puget Sound.

Trout Unlimited is one of the founding members in the Washington Department of Fish and Wildlife’s (WDFW) Puget Sound Steelhead Advisory Group (PSSAG), a citizen group made up of leaders representing the wide diversity found in the steelhead sportfishing, conservation, and business communities across Puget Sound. PSSAG’s goal was to produce a management document to be used by WDFW for Puget Sound steelhead. The finished product is what we call the Quicksilver Portfolio—the group’s recommendation of an adaptive and experimental approach for the future of Puget Sound steelhead fisheries and a path toward recovery. You can read up on the background of PSSAG, the process, and finished product here.

Last spring, working with WDFW staff, PSSAG members developed an ambitious budget request that would initiate the Quicksilver Portfolio, including population monitoring, fishery planning, hatchery production and watershed-scale experiments. Unfortunately, the pandemic hit in March 2020 and soon statewide agencies were looking at a 15% budget cut heading into the session.

After some discussions among PSSAG members and with WDFW staff, the implementation request was refined to only include funding for population monitoring and development of estimates for spawners in key summer steelhead populations of Deer Creek, South Fork Nooksack River, and North Fork Skykomish River and fishery monitoring funding for continuing the Skagit River winter steelhead fishery. This request totaled $1.68 million for the 2021-23 biennium and thankfully we worked to secure and protect this first round of funding and begin implementation of the Quicksilver Portfolio.

Given the current budget climate and expectations going into this session, we here at Wild Steelheaders United and Trout Unlimited are thrilled that state legislators, WDFW director and staff, and the Fish and Wildlife Commission (FWC) supported the concept of the Quicksilver Portfolio and agreed it was necessary to fund this initial budget request. We believe this is the necessary first steps to combatting the downward trajectory of both steelhead runs and fisheries in Puget Sound and it is our hope that moving into subsequent sessions, support for funding will continue in earnest.

The good news about the funding for the Quicksilver Portfolio also coincided with release of broodstock hatchery steelhead smolts into the Skykomish River, a key part of the Portfolio’s diverse angling opportunities.

With a severely understaffed outfit on the Olympic Peninsula, WDFW Enforcement has been unable to supply sufficient coverage and officers to enforce the popular fisheries on the OP’s West End. This session, we successfully worked alongside our partners to secure additional funding for WDFW enforcement officers, with the legislature funding an additional $1.4 million, which will help create a new WDFW Police work unit (detachment) based in Forks, and could include at least three officers and a sergeant to patrol the West End. This is one of the largest budget increases for WDFW Enforcement over the last three decades and helps to support efforts by WDFW to fulfill the tribal treaty obligations of our co-managers.

In what could have been a big conservation win for Columbia River steelhead, the legislature-approved a $2 million voluntary buyback program of Columbia River non-tribal gillnet licenses that represented a positive step toward harvest reforms and a reduction in the impacts to the already fragile B-run summer steelhead. It was instead stopped at Governor Jay Inslee’s desk. As we wrote about in-depth last week, Gov. Inslee exercised a line-item veto of this program, which we and our partners believe is a major step backward in the effort to rebuild depleted stocks of salmon and steelhead and runs inconsistent with the recovery plans for the numerous distinct populations of wild salmonids listed under the ESA, including summer steelhead.

Despite this setback, we told legislators this week that we will continue our work to refine Columbia River salmon and steelhead fishery management policy.

Other items within the operating budget beneficial to steelhead recovery and fisheries include $3.6 million for Long Live the Kings and partners to continue their work to improve the smolt migration out of Hood Canal and past the Hood Canal bridge. Right now, with a 50% mortality rate for juvenile steelhead at the bridge, this funding will be used to install and test fish guidance structures at the bridge to help the out migrating smolts avoid predators.

In addition to improving operations of the Hood Canal Bridge, the operating budget also included $1 million for diet surveys of pinnipeds in Puget Sound to help develop non-lethal management options for the ballooning seal and sea lion populations.

The WDFW was also budgeted $90,000 to complete a multi-year Cowlitz River hook mortality study on steelhead. Additionally, in response to the emergency coastal winter steelhead regulations from last season, the legislature has budgeted $300,000 for the WDFW to protect fisheries and develop steelhead fishery plans for Grays Harbor, Willapa Bay, and coastal Olympic Peninsula.

While a couple of fantastic TU habitat projects were left out of the capital budget, we were glad to see funding toward the Nelson Dam removal project included in the final agreement. The Nelson Dam is on the Naches River, which is a primary spawning tributary of the Yakima River. At the other end of the spectrum the state transportation budget, which funds fish barrier removal on state roads, came in much higher on fish passage than initially proposed. Thanks to federal stimulus infrastructure funding, the state is putting more than $1.1 billion toward state culvert correction rather than the anticipated $700 million for the 2021-23 biennium, pending federal approval.

While a big focus of this session was funding and budgets, there are a few policy bills of note that over the long term, will indirectly benefit steelhead conservation efforts across the state.

In the Senate, SB5159 reformed the payment is lieu of taxes (PILT) program within WDFW. PILT is a program that helps to reimburse counties for the property tax income that is lost when the state (WDFW in this case) purchases lands for habitat restoration and other projects. This is critical to keep the county and state on the same “team.” TU was part of the ‘PILT coalition’ that worked on this bill alongside the WDFW, counties, and other conservation groups. Despite the bills struggles last year and some minor resistance we were able to get the bill passed by a nearly unanimous vote.

Over in the House, HB1382 creates a pilot program to look at fish habitat restoration permitting for projects funded by a number of state sources that TU uses, including the Brian Abbott Fish Passage Barrier Removal Board, the Washington Coast Restoration and Resiliency Initiative (WCRRI), and the Office of Chehalis Basin Aquatic Species Restoration Program (ASRP) among others. The passage of this bill wouldn’t have been possible without the support of Rep. Steve Tharinger (D-Port Townsend) and the work of our partners at The Nature Conservancy.

While grassroots work is at the heart of what we do here at WSU and TU, this session would not have been possible without the addition of our new full-time staffer in Olympia, Alexei Calambokidis, working with the grassroots and legislature on behalf of steelhead and all cold water fisheries across the state.

We’re optimistic that next year the legislature will return to its usual in-person format and with it more face-to-face opportunities for steelhead advocates to engage with, including a 2022 Trout Unlimited lobby day. Stay tuned to the blog and make sure you’re on our email list as well.