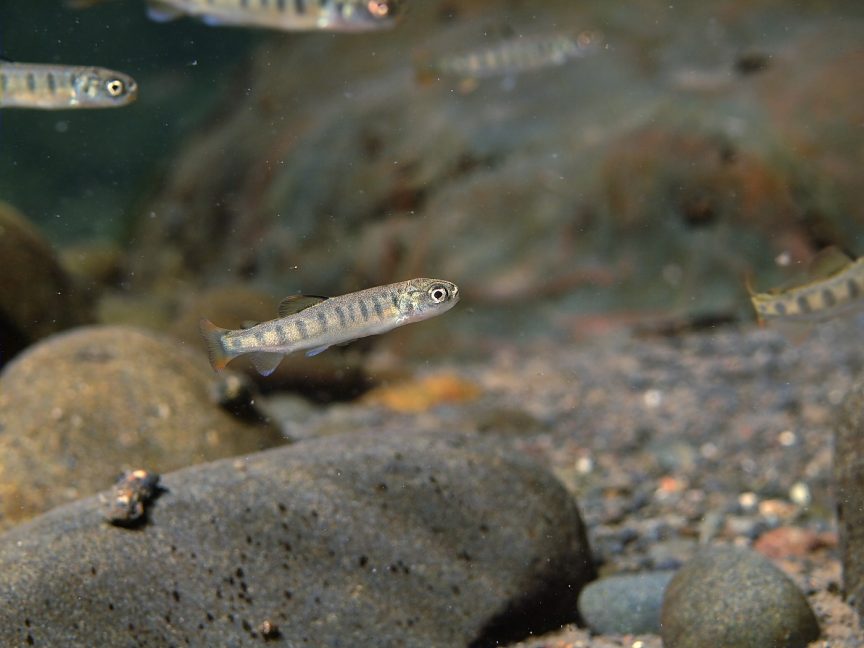 These little steelhead fry emerged from the gravel approximately three weeks ago and are no longer than your little pinkie finger. Their mom laid them in the gravel in back in mid-March, and they likely took their initial foray out of the gravel and into the main creek sometime in mid-May. In fact, it wasn’t until about 1.5 weeks ago that these juveniles moved out from the gravel during the daytime. Prior, they were nocturnal, only peeking out under the cover of darkness, which is a behavioral strategy that reduces their chances of getting preyed upon by daylight animals such as birds, otters, and mink.

But it comes with a cost.

Hiding during the day reduces opportunities to eat and grow, which is why there is always a biological tension for the fish. Take more risks to acquire more food and chances of predation increase. Don’t take enough risks and starvation sets in. It’s a delicate balance each fish encounters. What we have learned is that much of this behavior is regulated by their metabolic processes that regulate growth.

For instance, fish that have higher metabolic demands tend to use food less efficiently; they are not as efficient at converting calories to growth. Those individuals tend to display bolder behaviors, are often more aggressive, and will spend more time feeding. Essentially, they are like a V-8. They can go fast (grow fast for mykiss), but it requires a lot of gas. On the other hand, individuals with lower metabolic requirements tend to be less bold, spend more time hiding and less time feeding, and consequently, they take fewer risks. They’re more like a 4-cylinder, won’t go as fast, but they don’t need to take as many risky trips to the gas station. Something to be said for Steady Eddies.

Because these bolder, riskier behaviors have a heritable component — the physiological traits that regulate their metabolism — it is possible for different environments to select for differences in behavior and growth rates.

We mention all of these factors to highlight the complexity of steelhead biology, and underscore that all fry are not cut from the same cloth, and each redd may produce an array of genotypes, from V-8s to 4-cylinders and bold to shy. If we manage steelhead to maximize this type of diversity, we will be giving them the best chance to adapt to and keep pace with a changing environment—because you never know which stream will favor the bold, or which will favor the shy.

Have a great weekend and keep an eye out for the fry!