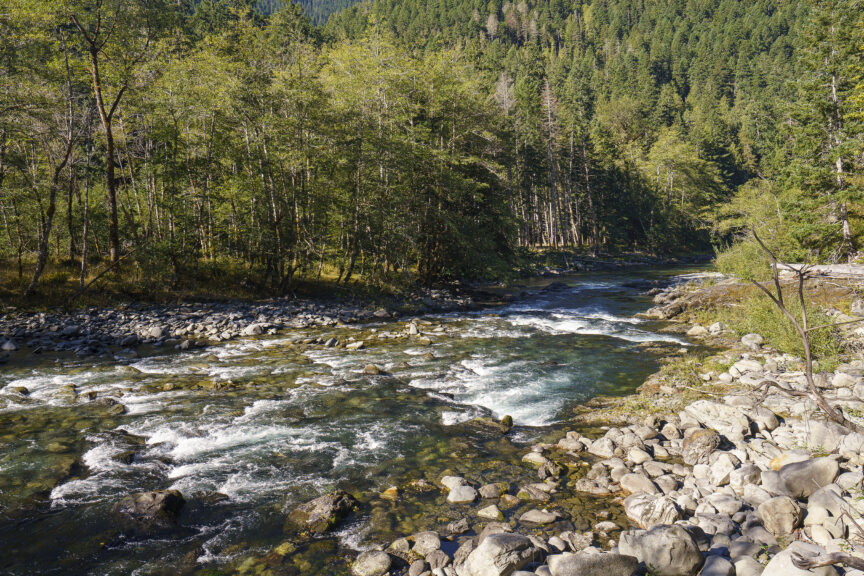 Fall is here. The rain is refreshing after a long, dry summer.

Fall means another field season of studying steelhead in the Elwha River is over. Wild Steelheaders again partnered with Ray Moses and other staff at the Lower Elwha Klallam Tribe on this summer’s data collection and analysis.

Although we experienced a remarkable heat wave early in the summer, overall the Elwha had an exceptional snowpack this year. As a result, runoff and stream flows remained high and strong through July and into early August — good conditions for in-migrating summer steelhead.

This is the fourth consecutive year we have counted steelhead in the Elwha by snorkeling various river reaches. For the past three years, summer-run adult returns were surprisingly robust — more evidence that the now-undammed river is enabling the Phoenix to rise from the ashes.

However, given the overall poor returns of steelhead all across the West Coast this year, we wondered whether Elwha summer steelhead would follow the same trajectory as other populations. To answer this question, we worked with biologists from the Lower Elwha Tribe and Olympic National Park to conduct an extensive snorkel-survey.

Allyce Miller (@peaceofallyce), Nick Chambers (@pnw_riverrat), and Josh Deady (@jeeeesh__) and I, along with our llama packer Rob Rutherford and the crew at Northwest Llama Adventures, hiked 12-miles into our basecamp in the Elwha backcountry (and thanks to Olympic National Park staff Heidi Connor (@nwrivernymph) and Josh Geffre for making the trip possible). We surveyed stream reaches within 5 miles of our camp, both upstream and downstream, while the Olympic National Park crew surveyed the upper-most part of the watershed and then followed up with a survey of Geyser Valley.

This work is difficult but exhilarating. It’s a tough haul hiking and snorkeling several miles each day, all while wearing thick wetsuits and carrying waterproof packs. But all of the partners in this effort are committed. The data we are collecting is starting to provide one of the best case studies for wild steelhead recovery anywhere.

As expected, we counted fewer adult summer steelhead this year than we have in the previous three summers. The total count in 2021 was just under 100 adults. Of course, that isn’t the population size, which is larger (there are a few canyons that are too difficult to snorkel and that undoubtedly have steelhead). We will calculate the total population estimate later using a statistical program.

The heartening part is that, while the numbers are down this year, this is just the beginning for Elwha summer steelhead. Even under the best conditions populations vary year-to-year, sometimes with and sometimes against regional trends, as nature selects the right life histories during the right years.

The Elwha summer steelhead counting project is truly a collaborative effort, and the Elwha tribe and Olympic National Park are exceptional partners. While these fish aren’t out of the woods yet, things look promising over the long run. Steelhead smolt production is increasing in the Elwha, as is natural production of Chinook salmon, and the size and life histories of bull trout are expanding.

Steelhead were blocked from the upper Elwha for over 100 years. It will take more time for steelhead and other species endemic to this watershed to fully recover here. Our snorkel surveys have shown that summer steelhead in the Elwha made a remarkable re-appearance shortly after the dams came out, and since then their adult return numbers have fluctuated. With large-scale restoration projects such as this, as Forrest Gump noted, you just never know what you’re going to get. But so far, the Elwha’s box of chocolates is providing the variety of goodness we hope to see in one of the most important river systems for wild steelhead we have left.

Read more about our ongoing work in the Elwha River basin and our efforts to support the recovery of wild steelhead.