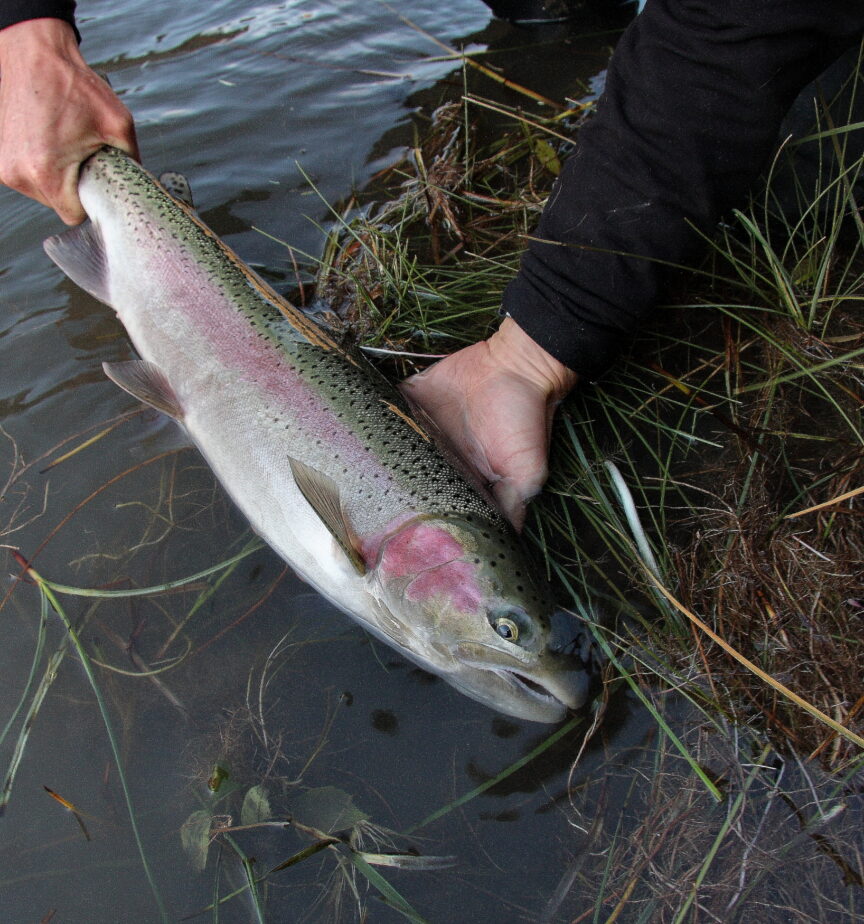 It’s mid-August. The doldrums of summer for us steelheaders.

While we can find some shade and have a beer, steelhead don’t have it so easy, particularly in big dammed systems like the Columbia River, where main-stem water temperatures frequently exceed 70°F at this time of year.

This week we start by referring you to an article in the East Oregonian by Chuck Thompson and Valerie Brown titled Thermal-hopscotch, how Columbia River salmon are adapting to climate change. The article provides a nice description of the status of thermal refugia in the Columbia River and how steelhead are adapting to rely on those refugia, and highlights an upcoming report by the EPA that examines the importance of cold water refugia to the future of salmon and steelhead.

This is a topic we have riffed on several times in the past, but given the critical nature of cold water refugia, and as the warming climate makes the warmest time of year even hotter, it’s a good time to review what we know about these crucially important habitats and why it is critical to suspend angling in such places until mainstem water temps cool substantially.

Thermal refugia are cold-water habitats found at the junctures of coldwater tributaries to mainstem rivers. In the Columbia, tributaries such as White Salmon River, Herman Creek, the Deschutes River provide areas of cold, deep water adjacent to the mainstem river channel. Once the main-stem Columbia gets above 70F, steelhead increasingly rely on those refugia, hopscotching from one refugia to another as they make their way upstream.

This cooler water is paramount to their survival and fitness. Summer steelhead stage in freshwater for several months before spawning, relying mostly on fat stores accumulated during the ocean phase of their life history. Think of their fat stores as a “battery.” Summer steelhead have a limited energy in their batteries to make it upstream to spawn. Elevated temperatures raise their metabolism and require them to expend more energy to swim upstream, which in turn drains the battery faster.

For fish to survive their migration, grow eggs and sperm, and then spawn successfully, wild steelhead need as much energy in their batteries as possible, which is why cold water refugia are so important to their future in places like the Columbia and Snake Rivers. (For a deeper dive into this subject, check out this previous post).

Given the importance of cold-water refugia and the vulnerability of steelhead that stage in those habitats, we at Wild Steelheaders United were pleased that the Oregon Department of Fish and Wildlife (ODFW) Commission adopted temporary rules for the 2020 fishing season that limited angling for steelhead in thermal refugia at the mouth of Herman Creek, Eagle Creek, and the Deschutes River. And we applaud the Oregon Fish and Wildlife commission for adopting permanent rules protecting these critical coldwater refugia at their most recent meeting in August 2020. As we discuss in this post, this action is a big win for ESA-listed steelhead in the Columbia, including the legendary B-run steelhead that return to the Clearwater River each year.

Unfortunately, Washington State Department of Fish and Wildlife (WDFW) and their Commission have not yet enacted rules similar to ODFW. While we appreciate the recognition to further explore the possibility of thermal angling sanctuaries in the Commission’s Columbia River Basin Salmon Management (C-3620) policy review, we strongly believe that immediate action for regular seasonal closures of cold-water refugia is needed to permanently protect summer steelhead. This will result in longer fishing seasons, more predictability for recreational anglers and commercial guides, and the cold-water areas will become fundamentally critical to ensuring that steelhead have enough energy to fulfill their spawning migration.

Make sure you’re on our email list (sign up here) and we’ll keep you updated on our progress and how to get involved with establishing these important protections for Columbia Basin summer steelhead in Washington.