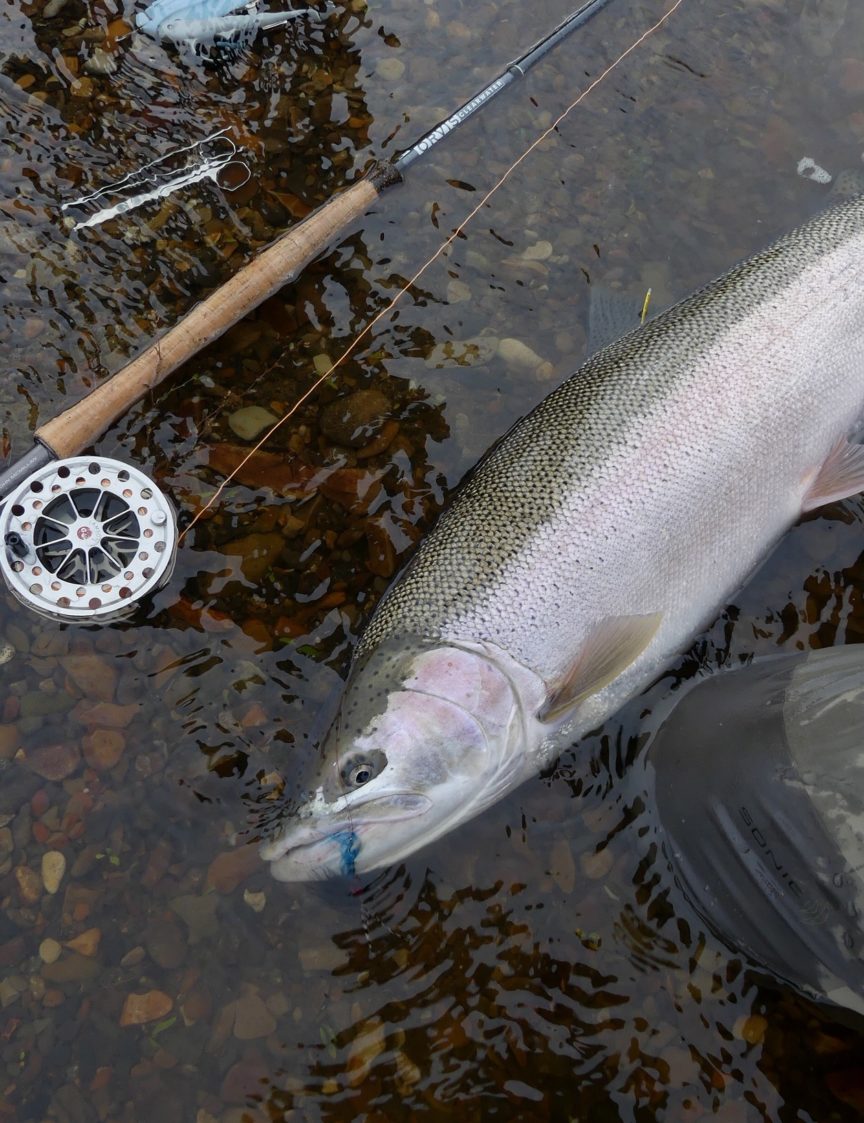 Imagine going back in time 100 years to the Columbia River. What do you think the steelhead looked like then? How long were they? How much did they weigh?

In the early 1900s scientists working with the federal Bureau of Fisheries visited the Columbia River, which was considered the center of steelhead abundance for the Lower 48 – and frankly, for the entire Pacific Rim. Their reports are astounding.

For example, they studied a collection of dead fish captured by local fishermen near the town of Corbett (by the mouth of Oregon’s Sandy River). Lengths varied from 31-45” and weights from 10-33 pounds. The average was 37” and almost 19 pounds.

It doesn’t end there. They also sampled over 4,100 wild steelhead collected at Celilo Falls (near The Dalles in Oregon) in September and October. Lengths of those fish ranged from 28-41” and weights from 9 up to 38 pounds!

Imagine a steelhead that is just over 40” and almost 40 pounds. That is unheard of by today’s standards — fish that reach 40” in length typically weigh about 20 pounds and nowadays 30 pound fish typically range from 42-45” in length.

Lastly, a substantial portion of the steelhead captured at Celilo were so well developed sexually that the scientists thought they would spawn in 4-7 weeks, which would have been late October through early December. As far as we know here at Wild Steelheaders United, there are no examples of fall spawning steelhead in the scientific literature, although that does not mean they don’t exist. There are examples of fall-spawning rainbow trout, though not in the Columbia River.

It is possible those fish were not going to spawn soon, but rather may have been sexually developed because they were going to overwinter in cold places that required them to be ready to spawn as soon as spring runoff occurred. It’s also likely that the fish collected at Celilo were destined for Idaho, presumably the Clearwater River — several hundreds of miles upriver.

It is clear, based on the length, weight and maturity of the fish sampled back then, that here was a tremendous level of diversity in the Columbia River steelhead population, enabling steelhead to take advantage of all the different habitat conditions throughout the year that were available to them in those days. Much of that diversity now appears to be depleted.

As we have discussed in several previous posts, remarkable life history diversity is a hallmark of steelhead as a species and has been the cornerstone of their successfully populating so many environments across their native range. As we work to recover our wild steelhead runs, in the Columbia River and elsewhere, we need to keep in mind that success will be measured not only by how many fish there are, but also their diversity in life histories, age, and size.