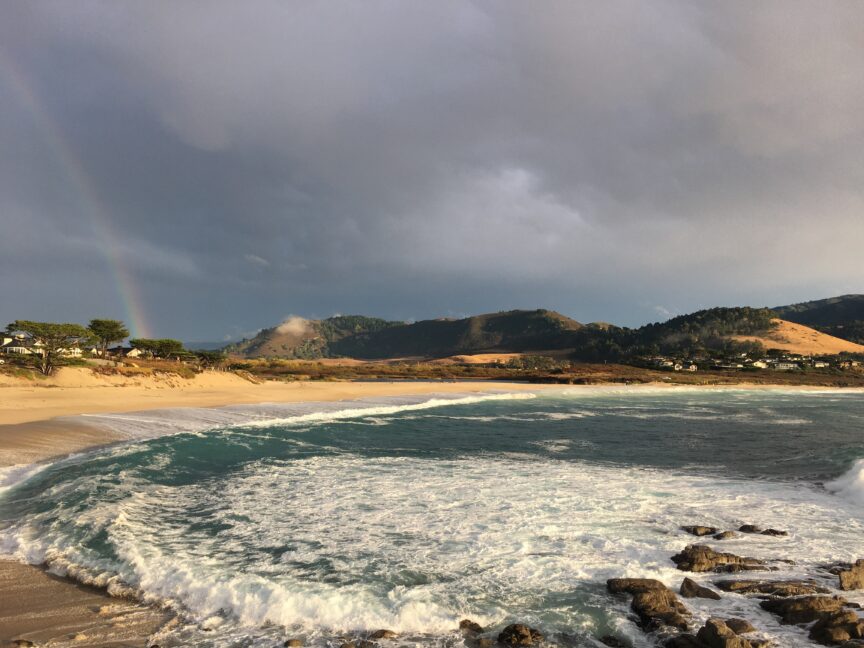 It’s been a rough start to the summer in the West, and unfortunately, it may get worse before it gets better. All this heat and smoke are tough on everyone in Steelhead Country, fish and people alike.

This week we have a guest scientist — Riley Gallagher — providing us an update on his work with steelhead in the Carmel River on the central coast of California.

Many folks remember the town of Carmel for having a mayor by the name of Clint Eastwood back in 1986. But only a few people remember that the Carmel River was once a great steelhead fishery. While the Carmel’s steelhead population has faced some very tough times in recent years, scientists and conservationists continue to conduct research and monitoring in this watershed — the highest priority river system in this region for wild steelhead recovery under NOAA’s recovery plan for the South Central Coastal Steelhead — to find ways to keep the population from going extinct.

“The Carmel is a lovely little river. It isn’t very long but in its course it has everything a river should have.” – John Steinbeck

Steelhead, as most anglers know, don’t necessarily die after spawning. Their ability to spawn more than once, referred to as repeat spawning, is an important biological trait that contributes substantially to their life history diversity and productivity.

Across most of the North Pacific, most rivers have enough stream flow in spring and early summer to easily allow post-spawn adult steelhead, or kelts, to migrate downstream and return to the ocean, where they will try to accumulate enough calories and fat to rebuild their physiological condition and regrow another batch of eggs or sperm.

However, along the California coastline there are several rivers where steelhead can have a very difficult time accessing the ocean. This is particularly true for ESA-listed steelhead distributed throughout California’s South-Central Coastal Distinct Population Segment. The region’s dry climate and long-term drought, combined with groundwater extraction, has reduced flows and sometimes resulted in portions of the Carmel River going dry.

This can prevent kelts from reaching the Carmel River lagoon. In addition, prevailing ocean swells in late spring deposit high volumes of sand that block out-migration in some of the central California rivers containing steelhead.

The Carmel River is one of the southern-most rivers in the United States with appreciable steelhead returns. The Carmel is characterized by low flow conditions, interrupted by flashy high-flow events. The Los Padres dam, constructed in the upper reaches of the Carmel in 1949, provides releases that augment summer flows for juvenile steelhead. However, with only 1,306 acre-feet of usable storage, releases from Los Padres to supplement low flows are limited.

To mitigate for water production demands on the Carmel, the Monterey Peninsula Water Management District (MPWMD) engages in juvenile steelhead rescues in drying portions of the river, rearing of juvenile steelhead, conservation, and relocation of kelts unable to complete their migration.

Passionate community members and steelhead advocates work collaboratively with MPWMD to locate at-risk kelts. MPWMD biologists capture, transport, and acclimate kelts in preparation for release into Carmel Bay. Prior to release, kelts are implanted with PIT tags (unique identifiers) in hopes they will be detected in subsequent years on the MPWMD/NOAA operated PIT-tag antenna array stationed in the lower Carmel River. Life cycle modelling and estimates of abundance can then be gleaned from tag return information.

Resident life history forms of O. mykiss in the Carmel River have been shown to provide a critical hedge against sustained dry periods in the Carmel River watershed. Studying the adaptability of steelhead will be increasingly important as populations continue to shift north as the ocean acidifies and air and water temperatures increase. Understanding protein expression of certain genes in the South-Central population may provide critical insight into management of northern populations.

Few things in life are as gratifying as the fleeting moments of interaction with a steelhead returning to the Pacific Ocean.

Here at Wild Steelheaders United, we are familiar with the long effort to recover steelhead in the Carmel River (in fact, one of our restoration staff lives and works in this watershed). Repeat spawning is an important component of life history diversity in steelhead, and there are now efforts in other watersheds, including the Columbia River, to capture kelts in freshwater, feed them, and then release them after they have been reconditioned.

We support the steelhead rescue efforts in the Carmel River, for all age classes of steelhead. Unfortunately, these types of actions are short-term solutions, an emergency response to a now terribly diminished and vulnerable population. Ensuring a future with wild steelhead in the Carmel River, and other rivers with similarly challenging habitat conditions, requires a longer-term plan and strategies for restoring habitat and connectivity throughout the system. That is why the removal of San Clemente Dam — the lower of two dams on the Carmel — several years back was so critical.

Many thanks to Riley and his associates for this post and their Carmel River steelhead work. For more information on the history of steelhead conservation in the Carmel, check out the longtime champions for Carmel River O. mykiss, the Carmel River Steelhead Association.